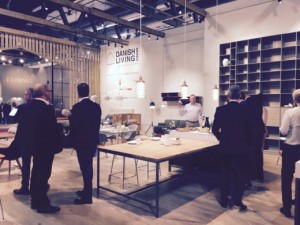 For the fifth consecutive year the Danish Pavilion DANISHLIVINGroom in Milan became a big draw for visitors from around the world.
The eight Danish companies who participated at the booth this year were:

In the same hall there was a common booths from Norway and Sweden, and during the fair, the possibility of making a major joint Nordic stand next year came up. Lifestyle & Design Cluster will discuss this further with the other Nordic partners and Danish companies on this opportunity.

‘Salone del Mobile in Milan is a central trade fair for the entire professional furniture world, but it’s also a very expensive show. If possible to reduce the cost and high light the visibility for exhibitors and booth overall at the same time, it’s an opportunity to be examined’, says director of Lifestyle & Design Cluster, Betina Simonsen.