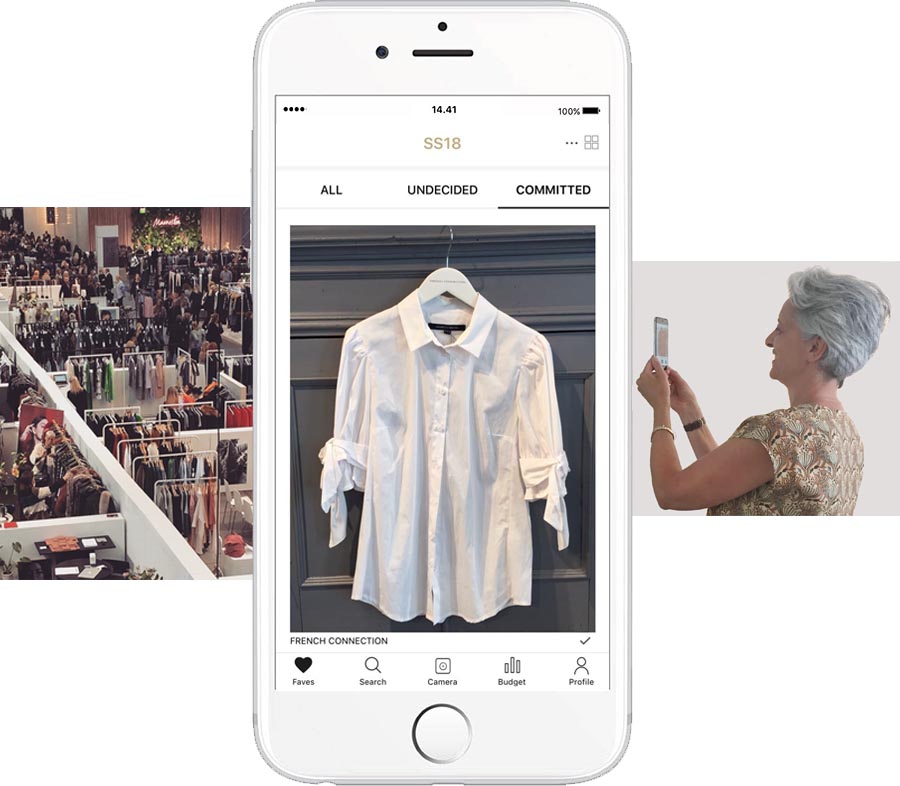 Fashion fair roars away. Over all, there are buyers with smartphones, look books, handwritten notes and spreadsheets with an overview of the purchases for the next seasons. The above scenario will be soon a thing of the past, if it was up to Ulla Hald, co-founder of FAVES, the app. The 53-year-old fashion-tech entrepreneur with a resume, which among other things says Apple in Cupertino, Calif., has created an app that will make shopping for multi-brand retailers “much easier” .

How it works FAVES

FAVES is a planning tool for small and medium-sized enterprises, while for the big firms can act as a “curating rings tool”, as Ulla Hald explains it. – It may well be, as purchaser has chosen any gray sweaters, one would like to buy, but will find a similar item that is also interesting. So it’s easier to weigh them up against each other.

– FAVES makes everything much easier for purchasers. It provides an overview, we hear that people are missing. They start six months before, the goods come in to the stores – travel around and selects, visiting showrooms, trade fairs, and agents. And so they must remember what they have seen, by writing notes, put the budget in separate applications and looking at pictures that fiddling around with holiday pictures. It is too cumbersome, says Ulla Hald.

When the pictures are taken, tagging them with different information. For example, brand, color, price, delivery date and other useful information, and these are stored in the user’s directory. However, there is one more layer of FAVES that make the app interesting for brands at the same time.

– Brands can upload their look books, where all their info available. In this way, retailers discover new brands. As fire, one can even choose whether a “profile” should be open and closed when FAVES protects brands design. We would in no way that big brands should be allowed to go in and steal the young brands designs. In this way determines the brands themselves, who they want to connect with – and can in this way also look for retailer’s specific spots with a specific selection, which they find interesting.

Currently FAVES is still testing the app further in collaboration with 12 brands.

Global pressures on the retail industry you have to be somewhat close blind not to see that retailers everywhere are pressured by large web shops, who can offer it all for half the price. Precisely what is also one of the benefits of FAVES, explains Ulla Hald.

– Local shops are under global pressure, so it has never been more important that they do things smart and do things the right way. No major companies have ERP systems that can deal with this, but it is few. No one has provided a solution for buyers from the small and medium-sized shops, as we do.

At the same time, Ulla Hald believes that FAVES can help to alleviate the annoying tendency with smaller independent stores that have to turn the key.

Through the needle and charm offensive in the United States

At the time of writing, Ulla Hald puts herself in an airplane against California and potentially giving her and her app a solid backstroke against breaking through on the international scene, which Ulla Hald repeatedly emphasises is the goal.

– In Europe, there are 160,000 retailers in the fashion industry, in the United States there are 140,000. They are all potentially in the target audience. If we only get ten percent of the mass to use FAVES, we’ll be in a five-year turnover of around $ 30 million.

During the California sun, she has to pitch her FAVES app for Jason Calacanis, known as an “angel investor”, investing in startups. It is him who has chosen Ulla Hald and FAVES to pitch for him and other investors as part of a pitch round exclusively for women.

“The small retailers are those who first notice the small upcoming brands and if nobody does anything to defend both the designers and the small stores, we lose both the edge Danish design is known in the world for, jobs in shops and other industries and our city life.

And for Ulla Hald, the goal is clear:

– Calacanis has invested in many unicorns (companies that have an estimated $ 1 billion worth of red.), But there may be other investors who make better sense. Of course, I’m looking for money, but at least as much for “smart money” who have experience with retail and have a natural interest in strengthening this.

– And then it’s just a wild, wild, wild opportunity! It’s really difficult to get through the needle eye, so it’s a success in itself, says Ulla Hald.

– I would like to have a dialogue with three good investors who are interested in following us. If the very right investors say “that’s what sounds exciting, give me traction results in the next couple of months,” then it’s really valuable, “concludes Ulla Hald.